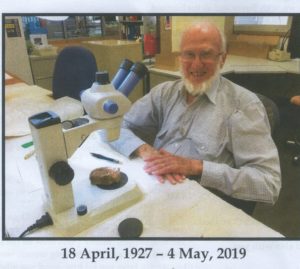 The world of science lost a true scientist and gentleman in the passing of Harold Trevor (Trevor) Clifford PhD DSc FLS FAIBiol OAM, on Saturday 4 May 2019 after a rapid and steep decline in his health.

Professor Clifford was invested as an Honorary Life Member of the Society on 24 March 2017. In his 70th year of scholarly activity, he officiated at the launch of the inaugural round of applications for the Society’s Research Fund, on 5 June 2018. He celebrated his 92nd birthday on 18 April 2019.

His funeral on 13 May at Christ Church St Lucia was a celebratory affair, as befits a person of goodwill and scholarly achievements over a long period. The Society shares the family’s sense of loss of a gentleman and a scholar in the finest tradition and has assured the family that we will perpetuate his memory.

Our sadness was compounded when we heard that his wife Mrs Gillian Clifford passed away not two months later. Farewell to a couple who were a source of inspiration to an untold number of colleagues, friends and family.

Trevor Clifford’s discoveries will live on. Four of his former associates have compiled a list of his scholarly publications: it runs to more than 10 pages.